Okay, first, if you are under the age of 95, you might ask, who is Jeanne Eagels? 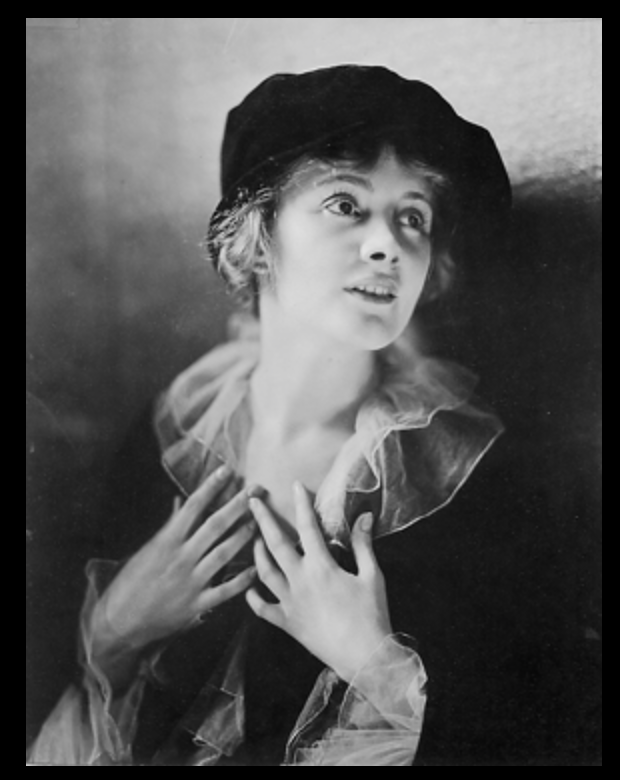 Jeanne Eagels, as a war orphan in the 1918 play “Daddies”

And she owned a 22-acre country estate right here in Ossining, described by the NY Times as situated “in the hill country north of Briarcliff and east of Ossining with a six-room house and outbuildings.”

In those days, Ossining was quite the place for the gentry to land.  Eagels’ Ossining connection was oddly strong — not only did she maintain a country house on Cedar Lane in the 1920s, she had also previously owned an estate called Kringejan at 1395 Kitchawan Road. According to Eric Woodard and Tara Hanks in their biography “Jeanne Eagels: A Life Revealed” [buy it here if you’re interested] she fell in love with the Ossining area when she was making films at Thanhouser Studios in New Rochelle. (Who knew that there were silent film studios in Westchester? Not I!)

Her house is still standing at the intersection of Cedar Lane and Stormytown Road.  It has always caught my eye because it is completely out of character with the more modern and unassuming houses on either side. But I didn’t really think much about it until my friend Guy Cheli happened to mention that some silent film star named Jeanne Eagels had lived there.

And then I got a little obsessed.

The story goes that she ran off with the Dubinsky Brothers Stock Company at the age of 15 (or 17 or 21.)   Starting off with a few small parts (and possibly by marrying one of the Dubinsky brothers) she clawed her way to the top.

Arguably, her most famous role came in 1923 as Sadie Thompson in the play Rain. Whether you know it or not, I can guarantee you’ve heard of it somehow, or at least of the character of Sadie.  Based on the scandalous 1921 short story by Somerset Maugham about a prostitute named Sadie Thompson and the missionary who rapes her (okay, I’m taking gigantic liberties with the intricate plot,) Rain first premiered on Broadway in 1923 with Jeanne Eagels starring as Sadie Thompson. Lee Strasberg, (the father of Method Acting) called her Sadie “One of the great performances of my theater-going experience . . .  An inner, almost mystic flame engulfed Eagels and it seemed as if she had been brought up to some new dimension of being.”  Clearly, she was no slouch in the acting department. 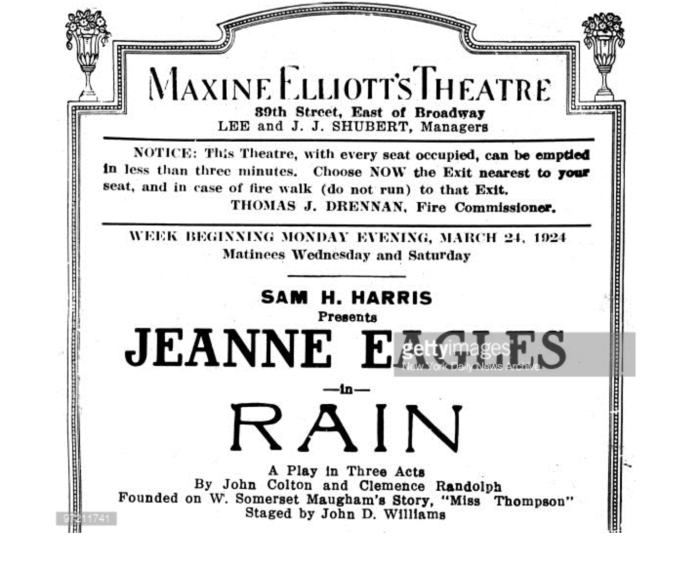 In 1928, Gloria Swanson produced and starred in the silent picture version called Sadie Thompson. Joan Crawford and Rita Hayworth also starred in later iterations of this story. And, in 2016, the Old Globe Theater in San Diego premiered a musical version also called Rain.  It’s a story that continues to fascinate.

Anyway, Jeanne Eagels was as big a star as you could be back then on Broadway and in film.  After her death, the NY Times reported that she left an estate totaling over $88,000 (that’s $1.1 million today) that consisted of her Ossining home, and nearly $12,000 in jewelry and furs. The Times also noted that she owned a Hispano-Suiza autocar, which sounds fantastically antique. 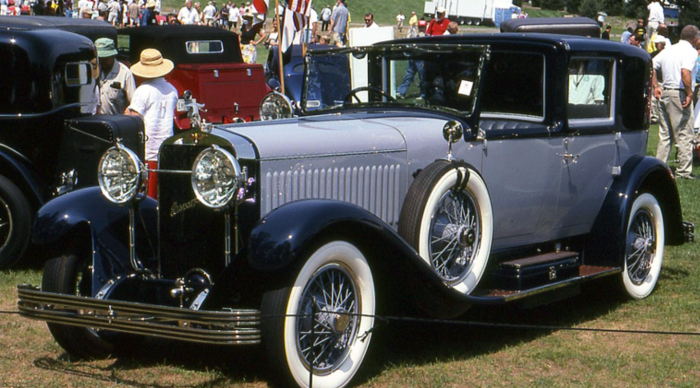 1927 Hispano-Suiza. Imagine living in Ossining when cars like that were on the road. She was, however, considered to be temperamental and unreliable. Here’s an excerpt from an article in the Milwaukee Sentinel from May 6, 1928: 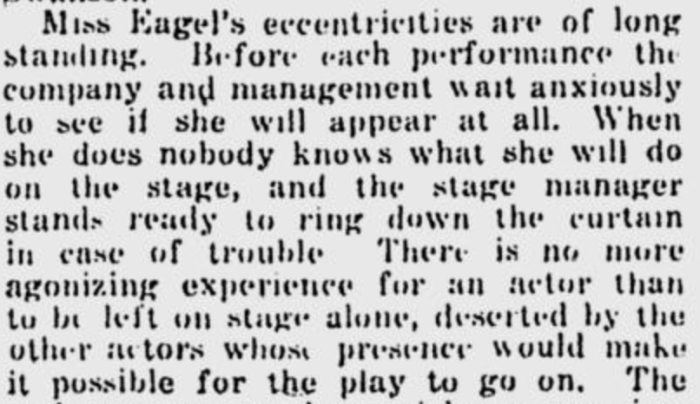 The article goes on to describe how her reputation was cemented when she starred in a 1926 play called “Her Cardboard Lover,” and she simply disappeared when the show moved from Chicago to Milwaukee:

Days passed, the theatre remained dark, the company idle, the management began to tear its hair, already made gray by the erratic star. Towards the end of the week, the lady of mystery turned up with the simple explanation that “She hadn’t been feeling well.” It was too late to do anything in Milwaukee, but there was a fine advance in St. Louis. So the manager bought flowers for the star and the company took turns petting and pitying her and asking no questions.

But the newly formed Actors’ Equity Association (of which Eagels had been unsupportive and refused to join) brought her up on charges, levied a $3,600 fine equal to two weeks’ salary (or $48,000 in 2016 dollars) and banned her from appearing on the stage for a year. (Imagine AEA doing such a thing today!)

In response, Eagels just went off and made films.  Here’s a link to a scene from her last film, “The Letter.”   It’s her only talkie, and she chews the scenery so magnificently that she was posthumously nominated for a Best Actress Oscar Award (it went to Mary Pickford instead.) And now you know who Jeanne Eagels was.