The Croton Aqueduct is a favorite for local runners. It’s actually a 41-mile long narrow, ribbon of a park that stretches from the Croton Dam to mid-Manhattan. Unpaved, flat, protected, and with a gradual downhill incline, it used to bring water from the Croton Reservoir all the way into Manhattan.

It’s really one of the great engineering feats of the 19th century, so I can’t let this opportunity pass without giving you a thumbnail sketch of this marvel.

Now, technically it is known as the “Old Croton Aqueduct,” hence the “OCA” signposts you’ll see periodically along the way. It was built between 1837 and 1842 and was in use until about 1890 when the New Croton Dam and Aqueduct were built.

Finding enough fresh water was a huge problem for 19th century Manhattan, as its population exploded after the Revolutionary War.  Also, despite the fact that the Romans had managed to invent and build sewers in their cities centuries earlier, this vital piece of technological evolution hadn’t made it to the New World and so their sanitation was not really up to snuff in those days.  Yup, early New Yorkers just emptied their chamber pots onto the streets, relieved themselves in cesspools, and had horses fouling the roads, all of which (and more) trickled into the wells, cisterns and underground springs that provided drinking water. Not surprisingly, people were getting sick and dying from all sorts of loathsome diseases that come from imbibing a side of e coli with breakfast – epidemics like yellow fever and cholera were rampant.

So, in 1833, the city engaged Major David Bates Douglas, formerly an engineering professor at West Point, to survey a route and oversee the massive project.  Imagine the bushwhacking his team had to do back then, coming all the way down from Croton on horseback, choosing a route, going through peoples’ farms and estates, making exact measurements, setting spikes. That certainly is a story in itself . . .

Anyway, for reasons I haven’t discovered in my sitting-on-the-couch-and-looking-through-the-Internet research, Douglas was fired in 1837 (and went off to become President of Kenyon College as one does), and an Engineer named John B. Jervis took over. He saw this project through to the end (and got his name on the plaques), building a dam (the Old Croton Dam), digging tunnels,  laying pipe, creating reservoirs, building bridges – when you stop to think about, this was a Herculean effort! And just think — it was all likely done entirely by hand – they might have had some sort of steam shovels/excavators back then, but probably not. Hey, the Irish were much cheaper.

The plan was that the water would come down to the city via the aqueduct and pause in the Receiving Reservoir. That still exists, and you’ve probably seen it if you’ve ever visited Central Park — it’s the body of water in the middle of the park, now called the Jacqueline Kennedy Onassis Reservoir. No longer used as part of the water system, it’s just a cool, 1.8 mile jogging track around a manmade lake in the upper middle of Manhattan.

The water then traveled downtown to the Distributing Reservoir located on what is now the site of the New York Public Library — 42nd Street and 5th Avenue. This was a massive structure, Egyptian in both size and design.  Check out this drawing:

And this photograph (not precisely sure what year this would have been, but likely circa 1895 – 1901): 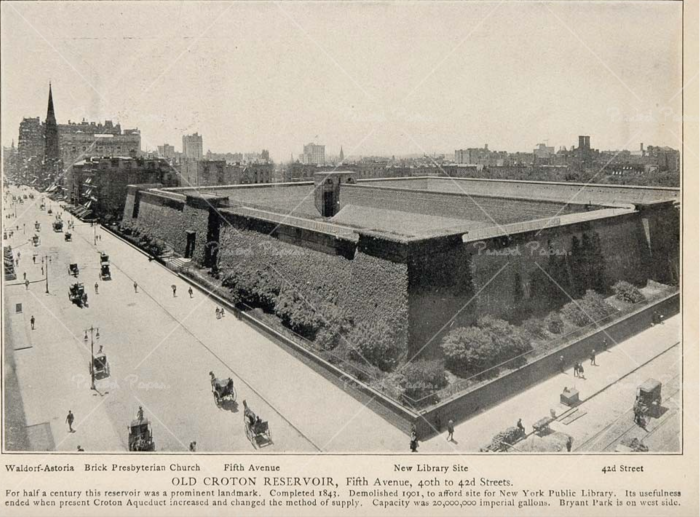 Fun fact: you can even see remnants of these reservoir walls embedded in the Library building today!  Lookie here:

The Aqueduct began carrying water to the city in June of 1842, and officially opened on October 14, 1842 to great hoopla.

Lydia Maria Child, an author of some renown, wrote about this day: “Oh, who that has not been shut up in the great prison-cell of a city, and made to drink of its brackish springs, can estimate the blessings of the Croton Aqueduct? Clean, sweet, abundant, water!”

(It seems so quaint, her excitement at fresh water, but I bet the citizens of Cape Town, South Africa would echo these emotions today.   As of this writing, they’re about a month away from running out of water.)

Here’s a ribbon that was printed for the “Introduction of the Croton Water” to Manhattan:

Okay, so this has become less of a thumbnail and more of a straight out history lesson, sorry about that. But can you tell I find the Croton Aqueduct fascinating?  (Here’s an excellent blog post about all of the above, with much more detail and lots of pictures.  Enjoy!)

Tune in next time to read more about the Aqueduct and the running project I’ve been pursuing (on and off) for the past year — to run the length of the Aqueduct.

Here’s the link to part II.

One thought on “The Croton Aqueduct, Part I”