One road that I run along frequently is Glendale Road.  And over the years, I’ve been tantalized by stories about this road from fellow runners and local historians – stories that include Revolutionary War-era tortures, the Leatherman, British raids, money and silver hidden in caves and wells – well, let me just get into it all.

First of all, Glendale began as a meandering farm road, mostly lined by working farms.   It was straightened into its current state in 1930 (probably a CCC project — thanks FDR!)  but if you look carefully as you run along, you can still see the old roads on either side – they’re mostly overgrown, but there are some stone walls that give you a sense of how comparatively hilly and windy Glendale Road would have been back in the day.   Here’s a survey of a portion of Glendale with the old road clearly marked: 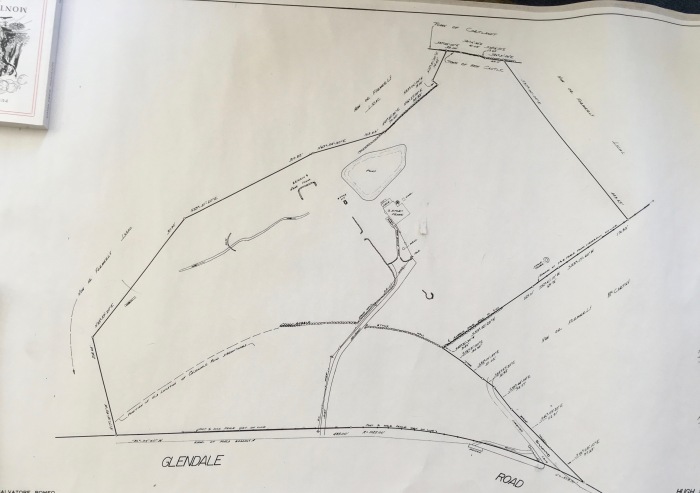 Now, there are quite a few old homes and estates along Glendale – the old schoolhouse, and the old church from the mid-1800s still stand and both are private homes.  (More on those another time.)  But stop and try to imagine what this area would have looked like 150 years ago:  farms, no trees, a working mine and a very popular racetrack.  So different from today’s bucolic, wooded wonderland.

So let’s fall through a portal into that time by way of 75 Glendale Road, aka Wolf Hollow.  Owner Carole Herbin generously invited me to visit and gave me an extensive history of the place.  It’s one of the oldest houses on Glendale, built in the mid-1700s.  While it’s been well-maintained and renovated to include all the needed amenities (gorgeous kitchen, master suite, etc.) it still retains its unique charming history with stone fire places, cast iron gates and original leaded glass windows.  Who knows, there might even be a ghost or two!

Let’s go back to 1776, the start of our glorious, triumphant revolution, when the Colonials threw off the shackles of England.  When they told crazy, porphyria-suffering George III that they were dissolving all connections and would form a more perfect union and govern themselves.

Now, during the Revolution, this particular corner of Westchester was oddly ignored.  But, while there were no battles fought here, the farmers in the area were constantly trying to “protect their crops from those thieves who sprang up often under the guide of patriotism to maraud wherever they believed property could be stolen with safety to themselves.”  (Ossining Citizen Register, 8/6/1935)

The British held Manhattan and environs slightly north of the island – the Colonials held Peekskill and north.  But the area in between, the Ossining History on the Run area if you will, was a sort of no-man’s land.  It seems that both sides, British and Colonials, were equally likely to be rummaging through the farms here.

In 1779, Col. Aaron Burr was put in charge of the Colonials of Westchester county – yes, THAT Aaron Burr, now best known as the antagonist of “Hamilton.”  As long as Burr was in charge, there was little looting in our neighborhood.  Even so, people in this area took to hiding their farm produce and personal items.  And by this, I mean stuff like cows and wheat and cash and clocks.  According to a 1935 article in the Ossining Citizen Register, one intrepid farmer resorted to hiding valuables in “the tavern in Scarsdale where a saber cut discernible today is said to have been made by a British officer who was attempting to force his entrance in the parlor of the building.  The Scarsdale Library door shows this cut today.”  (Anyone know if this is still true??)

So now we get to the legend of Benjamin Tillotson, a former owner of 75 Glendale Road.  He was a very prosperous farmer whose land stretched from the Croton River to Millwood.  (Stop and try to imagine that.  How much would that be worth today, is all I can think.)

He was a patriot who supported the Revolution and, as such, was often harassed by the Tories.  Because of this, he got very sneaky, and would hide his hogs in nearby caves and his wife would hide her bread in a secret box under the kitchen floor.   But he was outsmarted on one famous occasion.  The story goes that he had sold some animal – maybe an ox, maybe a horse, who really knows? – and had hidden the money in a cooperage block (oh, did I mention he also was a barrel maker? So this cooperage block thing was a barrel making accoutrement.) Whatever it is – because even with the Google I can’t quite envision this story —  he figured the money wouldn’t be found.  So when the Tories came for his money, he denied having it on the premises.  But they knew he was lying and got so angry that they, supposedly, hung him up by his thumbs from an apple tree next to his house that flowered until this very century.  “So near did this persecution come to causing his death that his wife, who knew the secret of the hiding-place, unable to endure the sight of her husband’s agony, revealed the place.  The cooperage block was split open and the money immediately stolen.”  (Ossining Citizen Register)

Imagine that.  Redcoats torturing our neighbors!

I got a little obsessed with the idea of caves in the area where 18th century locals hid their hogs and silver, and took a little bushwhack of a hike.  (Just follow the blue trail/Catamount Hill Loop from the Cliffdale Farm entrance on Teatown Road.)  Supposedly the Leatherman was known to stop in these caves.  While I saw large rocks bordering ravines, I couldn’t really find anything that seemed big enough for a person (or a cow) to hide in.  Of course, there’s a lot of private property around here, so I couldn’t investigate too thoroughly.  But I did convince myself that I found some arrowheads: 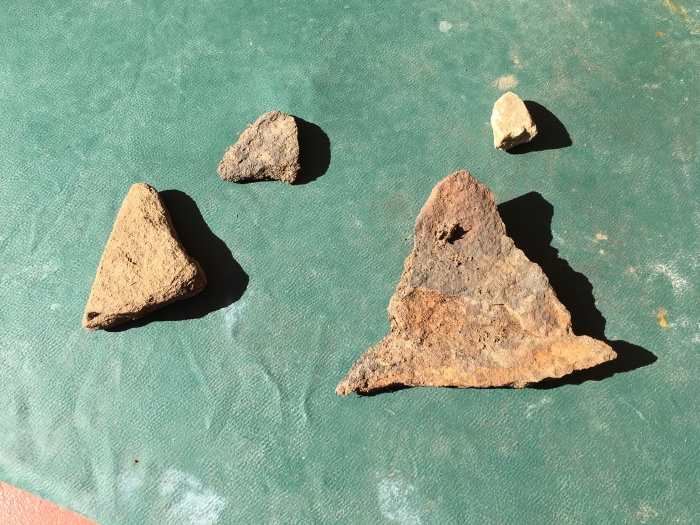 On a side note, in the basement of the house at Wolf Hollow are the remains of a old jail, supposedly used to hold prisoners until the circuit court went into session.  This system involved having judges “ride the circuit” — actually travel between individual towns to hear cases, so that the average citizen didn’t have to travel long distances to receive justice.  Wikipedia tells me that this was begun by Henry II in England in the 12th century.   In the American version, the judges travelled on horseback or via stagecoach accompanied by lawyers to hear cases.  Abraham Lincoln spent some time doing this in Illinois.  Here are some photos: 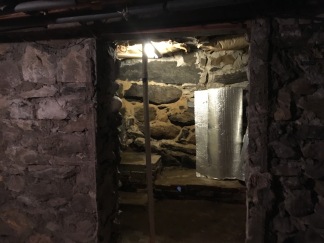 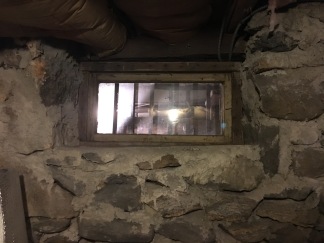 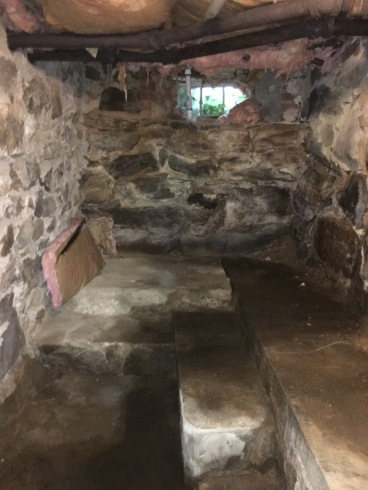 This is more or less a free-standing stone structure built right into the middle of the basement.  Sure looks like a prison cell to me!

Another interesting character who lived at this site is Julie Campbell Tatham, author of Trixie Belden series (think of a mid-1940s version of Nancy Drew.)  Trixie (short for Beatrice) was a teenage girl who lived on Crabapple Farm just outside “Sleepyside-on-Hudson.”  Adventures ensue when she and her best friend Honey Wheeler (a lonely rich girl) band together to solve mysteries. 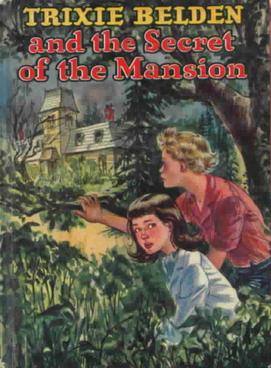 History is fascinating, isn’t it?