Have you ever noticed that snow white mansion on Rt. 9 about a mile north of Mercy College in Irvington? I don’t know how you’d miss it . . . 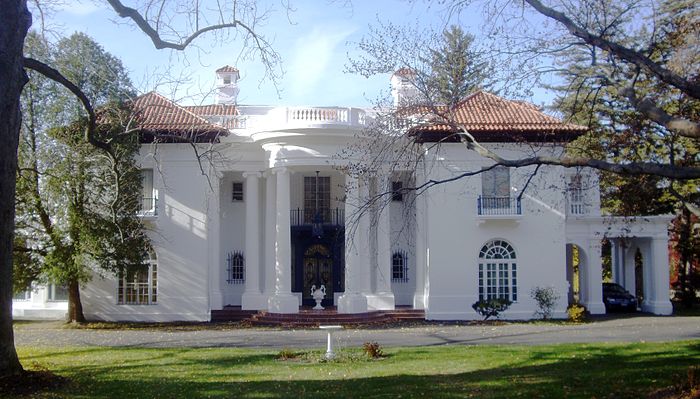 I had noticed it for years before I finally found out what it was and, of course, there is quite an interesting story attached to it.  So sit back, enjoy a latte from First Village Coffee in Ossining (shameless plug and no they don’t pay me!) and follow me back in time to 1917 when the New York Times wrote an article about Madam C.J. Walker entitled “Wealthiest Negro Woman’s Suburban Mansion – Estate at Irvington, Overlooking the Hudson and Containing all the Attractions that a Big Fortune Commands.”

It’s strange to me that Madam C.J. Walker is rarely mentioned today.  Even the National Museum of African American History and Culture relegates her to a just small display: 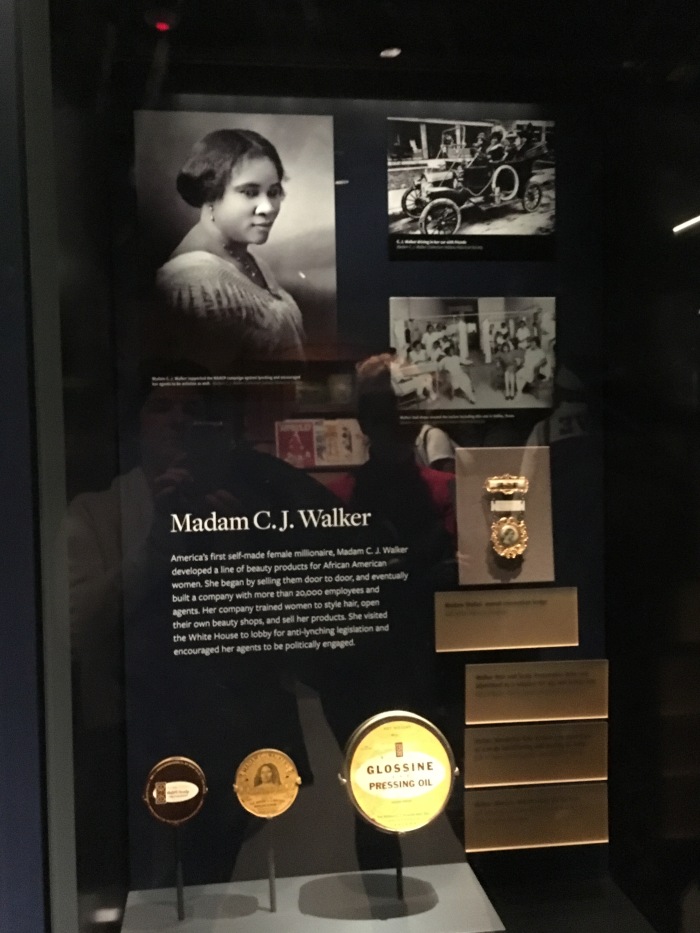 Perhaps the reason is that she made her fortune selling hair products – pomades, shampoos and hot combs – and many believe that the thrust of their appeal was that they made curly black hair smooth and straight.  Perhaps, but she was, if not an actual millionaire, still the epitome of the pull-yourself-up-by-the-bootstraps figure America loves to glorify.  And her hair products business was one of the most long-lived and successful African-American owned businesses to date.

Born in 1867 as Sarah Breedlove in Delta, Louisiana, she was the only member of her immediate family who was never a slave.  Her family was still living on the plantation of their former owner, Mr. Burney, in a sharecropper’s shack.  Here is a photo of her birthplace:

(Photo from “On her Own Ground: The Life and Times of Madam C.J. Walker” by A’Lelia Bundles)

It is exactly what I imagined a sharecropper’s shack would look like.

Now, I found the above photo and most of the following information in a fascinating book written by her great, great grand-daughter A’Lelia Bundles, entitled “On her Own Ground: The Life and Times of Madam C.J. Walker.”

(A’Lelia is an interesting figure in her own right, a TV producer for various NBC shows in the 1980s and ‘90s.  And I understand her book was just optioned by Octavia Spencer for a TV series about Madam.)

Sarah Breedlove’s story is Dickensian, if Dickens wrote about African-Americans.  Orphaned at the age of 7, she moved in with her older sister in Vicksburg, Mississippi and worked as a house cleaner, a laundry girl and whatever other menial jobs she could find.  She married at the age of 14 (because Mississippi) and had her only child, Lelia, at the age of 18.  Widowed at 20, she moved around the country (remarrying twice more) until she settled in St. Louis, where her two brothers were successful barbers.  She started selling hair products for what would become her chief rival, Annie Turnbo Malone’s Poro Company.  It’s around this time that she became Madam C.J. Walker, taking the name from her third husband, Charles John Walker.    Madam Walker learned the ropes quickly and branched off to sell her own patented hair growth formula.

She moved to Colorado, then Pittsburgh, then Indianapolis, opening salons and mail order businesses along the way.  Her business model was very close to the multi-level marketing  format used by companies such as Arbonne, NuSkin, Shaklee and Amway today.  While I’m not saying she invented MLM (she had, after all, sold hair products for another company before she opened her own)  she certainly streamlined and profited from the concept.

As she climbed the ladder, she became involved in philanthropy and activism, perhaps as a business strategy, perhaps altruistically.  But she counted Booker T. Washington and W.E.B DuBois as friends, and was frequently invited to speak at various conventions.

In 1913, she purchased a townhouse in Harlem at 108 West 136thStreet and installed her daughter Lelia there to run the NY operation. 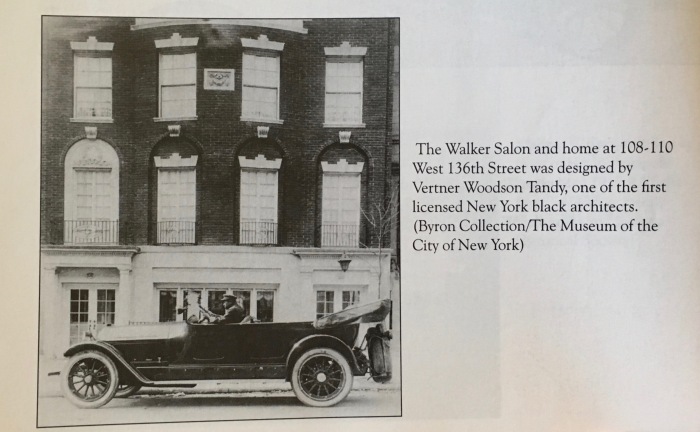 (Another photo from “On her Own Ground: The Life and Times of Madam C.J. Walker” by A’Lelia Bundles)

In 1916, Madam Walker  purchased a parcel of land in Irvington and hired Vertner Tandy, the first licensed, African-American architect in NYC to design her mansion.

The aforementioned 1917 New York Times article is casually racist as they describe the local reaction:  “On her first visits to inspect her property, the villagers, noting her color, were frankly puzzled.  Later, when it became know that she was the owner of the pretentious dwelling, they could only gasp in astonishment.  ‘Impossible!’ they exclaimed.  ‘No woman of her race could afford such a place.”  Oh 1917, was that when America was great?

Her home became known as “Villa Lewaro,”  supposedly so named by Enrico Caruso, a frequent guest.  He is said to have cobbled the name out of Madam’s daughter’s:  LElia WAlker RObinson.  Even if that’s apocryphal, I like it, and say it’s true.

The house and grounds were lush and luxurious.  According to A’Lelia Bundle’s book:

“With imported Japanese Prayer Trees and flowering shrubs and perennials timed to bloom continuously from early spring to late fall, Madam Walker’s Italian gardener intended to create a setting as magnificent as that of any of the surrounding estates with their formal gardens and impeccably tended grounds. . .  From the curved balcony outside her sleeping porch, Madam Walker could see the NJ Palisades looking above the Hudson River like a fortress . . . Her airy boudoir – which caught the early sun through French doors – was designed for pure indulgence with its twelve-piece Louis XVI chamber suite of ivory-enameled mahogany arrayed upon a nearly wall-to-wall hand-woven Aubusson carpet.  On warm mornings, her housekeeper served breakfast downstairs outside her first floor dining room on the upper level of a two-tiered terrace.  At night, yachting parties were known to beam their searchlights across those terraces, illuminating the crochet-like balustrades that dramatically latticed the rear of the house.”

Madam Walker was quoted as saying that she had built her house “to convince members of [my]race of the wealth of business possibilities within the race and point to young Negroes what a lone woman accomplished and to inspire them to do big things.”

(Another photo from “On her Own Ground: The Life and Times of Madam C.J. Walker” by A’Lelia Bundles)

Madam C.J. Walker in her prime

Sadly, she only enjoyed her home for a year or so before succumbing to kidney disease in 1919, at the age of 52. Villa Lewaro stayed in the family until 1931 when I assume that the Depression made it untenable for Lelia Walker to maintain. It was apparently then the  Anne E. Poth Home for Convalescent and Aged Members of the Companions of the Forest in America (thanks Wikipedia!) and in 1976 it was designated an Historic Landmark.   It has been in private hands since the 1980s.  What I wouldn’t give to see the inside!!