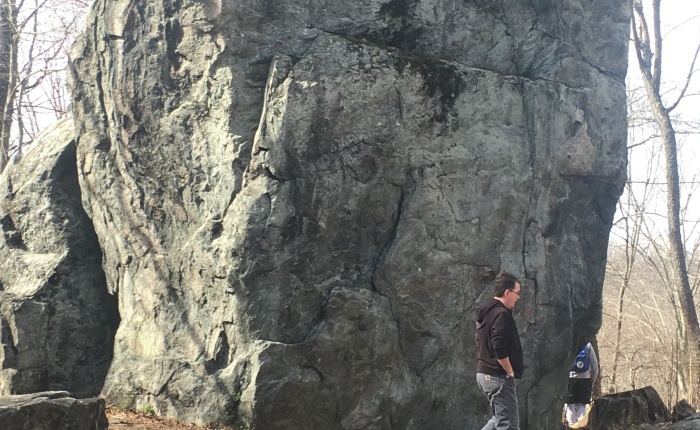 I am well aware that, with the exception of my post on the Hunterbrook Shelter, everything else I write about here is post-1700s.  Part of that, of course, is that I’m writing about things I notice when I run, and they tend to be something of the built, or modern,world.  Part of it is, I must admit, a generalized European prejudice – I just don’t notice things that aren’t familiar to me.  That said, sometimes there are things from the natural world that are so spectacular that they cannot be ignored.

The glacial erratic in Rockefeller State Park is one of those things.

It also stands as a reminder that our world existed for millions of years before us which, in this time of pandemic, is ironically soothing to me.  (NB – this post was written in March of 2020 during the Covid-19 crisis)

But I mean, check this thing out: 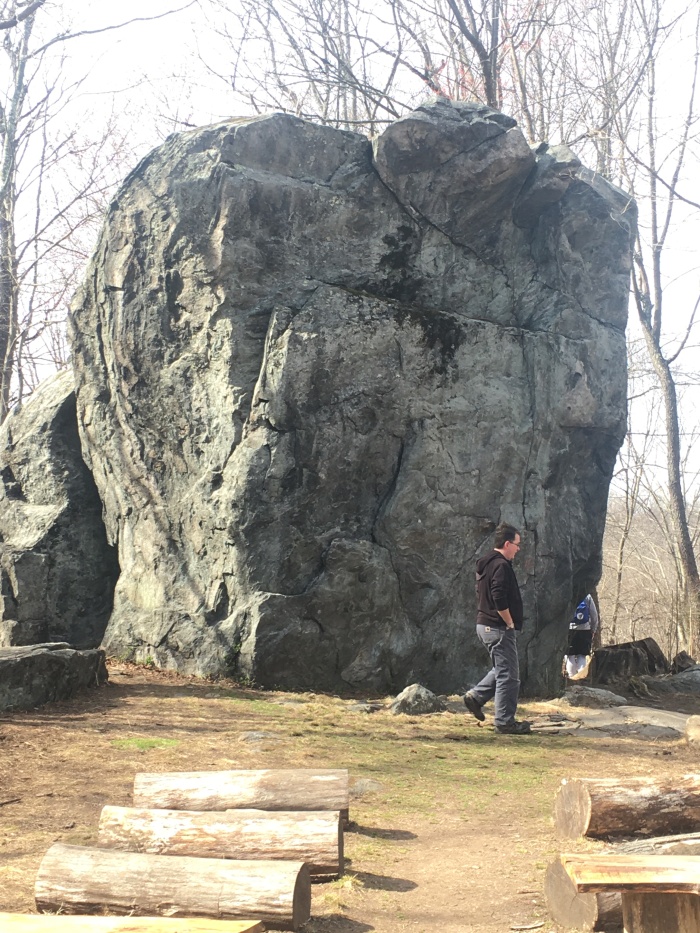 You can get here by entering the park at the Route 117 entrance and parking in the (pay) lot at the top of the hill.  Then, take the NW (Nature’s Way) trail out of the lot or the SH trail (Old Sleepy Hollow Road Trail) down the hill.  From both trails, you will see a sign for the Glacial Erratic.  Check out this very poor screenshot of the map:

And here is a sign that tells you more – of course, the point of this blog post is to tell you that more, but I want to give Brett Turenchalk of Pleasantville Troop 12 credit for his work.  I imagine it was his Eagle Project and I thank him very much for finding this spot and choosing to honor it: 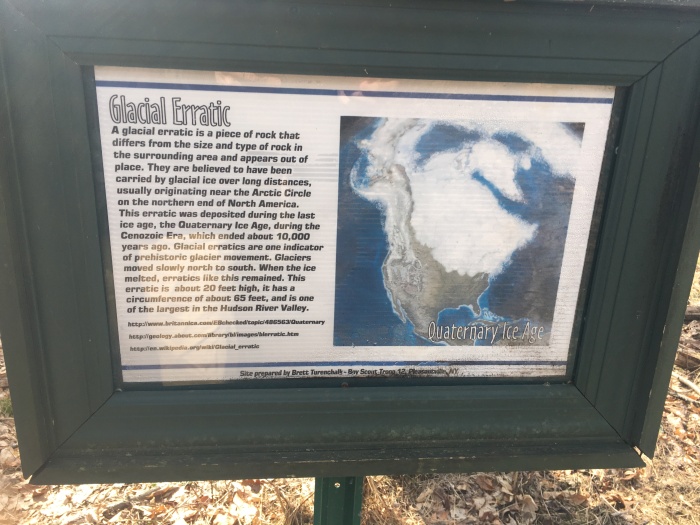 This boulder is something I’ve run by for YEARS and never noticed.  (To be fair, it is well off the usual path I run, but still . . .)

So what is this thing, this giant rock that stands so proudly and oddly in the midst of nothing like it?  It is called an Erratic, or a rock that was dragged here from perhaps as far away as the Arctic Circle, by a glacier thousands (millions?) of years ago.

Stay with me, people, as I attempt to summarize geologic history in blog-friendly form:

I could dig deeper and tell you that it is one of three periods in the Cenozoic Era but I won’t.  As recently as 10,000 years ago (also known as the Pleistocene Epoch, as opposed to the Holocene Epoch, which is the one we’re currently in) our whole area – Ossining, Croton, Rockefeller State Park – was covered in sheets of slowly moving ice, and humans, mastodons and mammoths co-existed.  (In between the ice, I guess.)  These ice sheets are thought to have reached about halfway up the Empire State Building, if I remember the NYS exhibit at the Museum of Natural History correctly.  You can see the evidence of these ice sheets/glaciers in the rocks that show signs of striations, or long gouges, in them.  Take a hike anywhere in our area and you’ll see them.  These ones are in my backyard:

See the long scratches in the rock?  That’s evidence of a glacier slowly scraping its way over this rock millions of years ago!

Erratics are actually everywhere if you let yourself see them, though I’ve never seen one as big as this one.  There are several in Central Park and, honestly, if you walk around just about anywhere up here, you are bound to see them.  It really is amazing how easily we gloss over odd things like this — seeing them, but not seeing them, if you know what I mean.  (Actually, I think that is the best summary yet of what this blog is all about, but I digress.)

This particular Erratic is, according to Scout Turenchalk, is about 20 feet high and 65 feet around.  On the back side, I think you could climb up it fairly easily, but there were lots of young kids around when we went and we didn’t want to encourage them to do something risky.  It is so large, though, that it gives you a powerful idea of how strong these glacial ice sheets were, that they could shift rocks as giant as this one.  This also makes me think about the randomness of nature, that the ice melted enough right here to deposit this boulder in this exact spot.

Now, a cursory Internet search has not turned up anything credible on this specific Erratic.  I did find an academic article from 1994 written by a member of the Hofstra University Geology department that goes into great depth as to which glacier could have deposited this boulder.  (The authors assert that the glacial features created during the Pleistocene were likely caused by four glaciers, not just one.   Check out the article here: http://www.dukelabs.com/Publications/PubsPdf/JESCM1994b_GANJ_GlacialNYC.pdf)

As to what kind of rock this is – gneiss, schist, shale, limestone . . .?  Short answer is that I don’t know, but if any of you are geologists, please check it out and get back to me so I can update this post.

One of the things that endlessly fascinate me are the ‘gates to nowhere’ that I pass on my runs.  You know what I mean — those stone entranceways that sit just off the road, often covered in vines, sometimes with a name carved into them. The last vestiges of a grand estate sitting forlorn and forgotten. It’s at once tragic and mysterious to me that someone once spent the time and effort to install a stone gate to mark the entryway to their property, yet today it’s reduced to a stub of a thing leading nowhere.  What happened?  Why?  Where are the people that put the gate up?

Since I have nothing else to think about when I run, I find myself getting terribly existential, and mourn the ephemeral nature of our world. Then I get mad — it’s a sad commentary on our respect for history that an estate or farm that once merited a grand gate can just be erased from memory and topography by real estate developments.  (Of course, to be fair, often those developments memorialize what was there by naming themselves after it.)

Some of these gates are connected to estates I’ve blogged about before.  Some are of unknown provenance.  If you know anything about these mystery gates, please let me know and I’ll update this post.  (Who knows, perhaps they’ll even merit a post of their own!)

This first one can be found on Spring Valley Road, almost exactly across from the Heady Family Cemetery, and is one of the mystery gates.  It seems to have “Lichtstern” etched into it on the right-hand pillar.  I have not been able to find any records of such a family anywhere in the area.  Anyone? 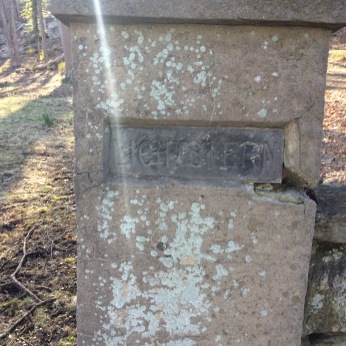 This is the pillar for the entrance to John Cheever’s old house.  It looks as if it’s been maintained in the recent past, so I like to think that Cheever had it rebuilt and a new namestone engraved.

Here is the entrance to Carrie Chapman Catt’s former Ossining home, Juniper Ledge.  It looks random and forgotten, sitting as it does on North State Road, catty corner to Club Fit, but it is in fact still guarding the driveway to where Catt lived in the 1920s. 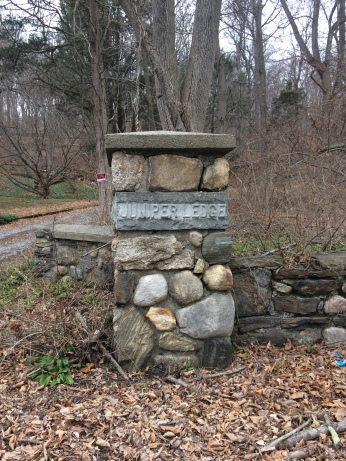 These are the pillars for the Brandywine estate entrance, now the Briarcliff Manor Center for Rehab and Nursing Care: 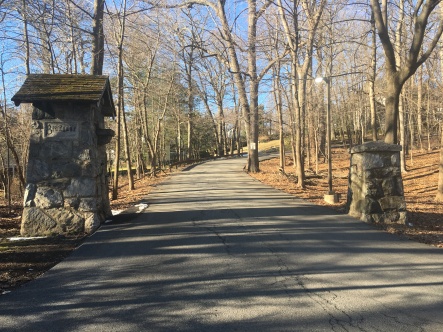 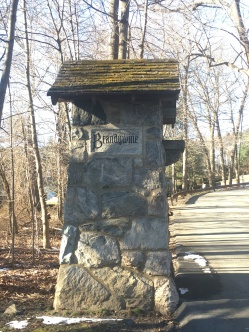 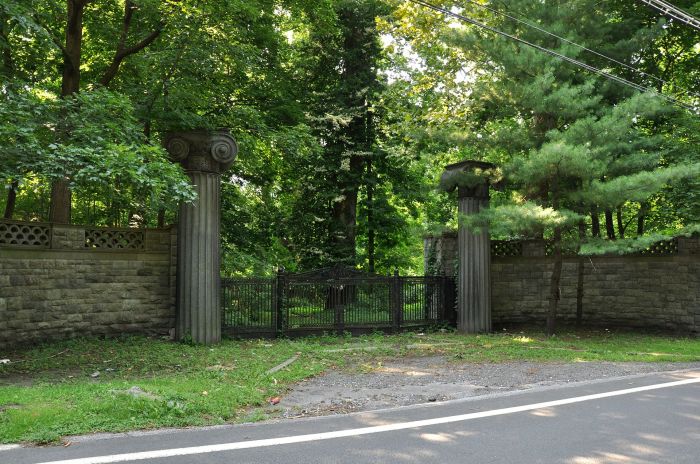 The two photos below show the gate to the Kress Estate (today’s Cedar Lane Park), now and then (the ‘then’ photo is courtesy of grandson Rush Kress via Steven Worthy’s Facebook page “Save the Kress Buildings at Cedar Lane Park“): 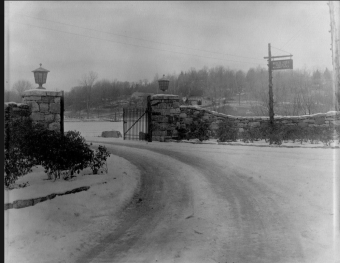 These next three examples are likely leftovers from the McCord Farm which, in the 1750s, encompassed about 225 acres and was originally part of Frederick Phillipse’s Manor.  (This definitely requires its own post!)

Now, I’ve been told by those who know, that these pillars – found at the intersection of 134 & Kitchawan Road/Croton Dam Road – were the original entrance to the McCord Farm.  Since the main farmhouse is all the way over at the corner of  Narrangansett and Collyer, I kind of question that assessment, but since I have nothing better to add, I’ll leave it there until I learn more: 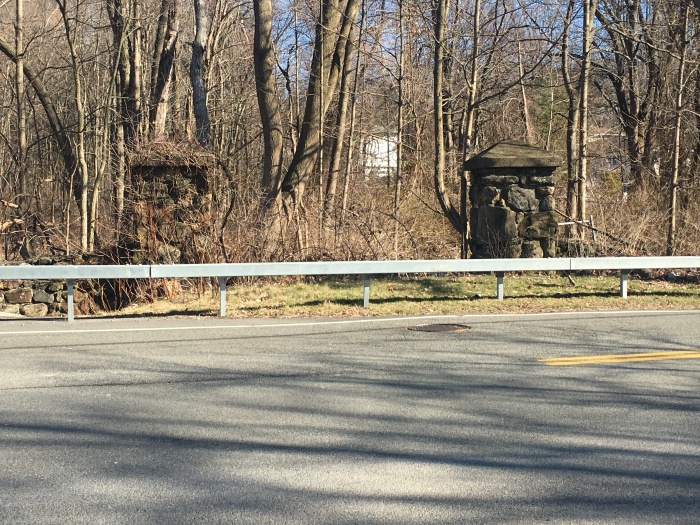 This gate sits along Narrangansett near Bayden Road and has been nicely incorporated into the entrance of the current house: 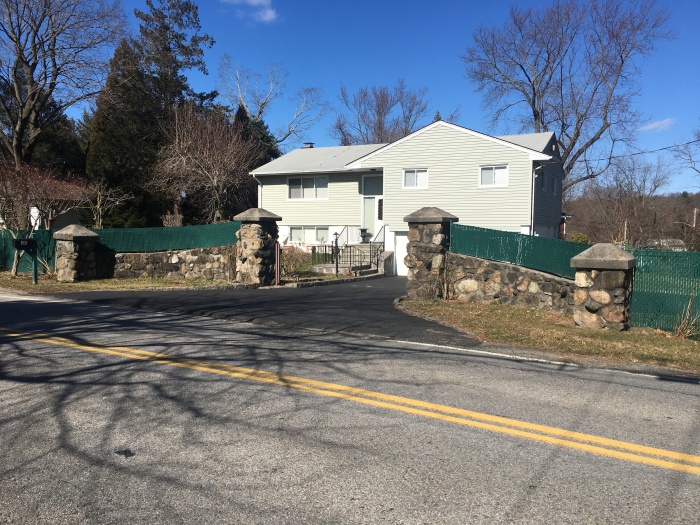 This one’s kind of hard to see, but it’s at the intersection between Croton Dam Road and Narrangansett.  If you look really closely, you can see it has brass letters that read “HarrieDean” on the left column:

These pillars are at the corner of Eastern and Watson — not at all lined up with the house behind.  So curious!

Are there any other old gates in the Ossining area that you’ve always wondered about?  Send photos and locations and let’s see if we can solve their mystery!