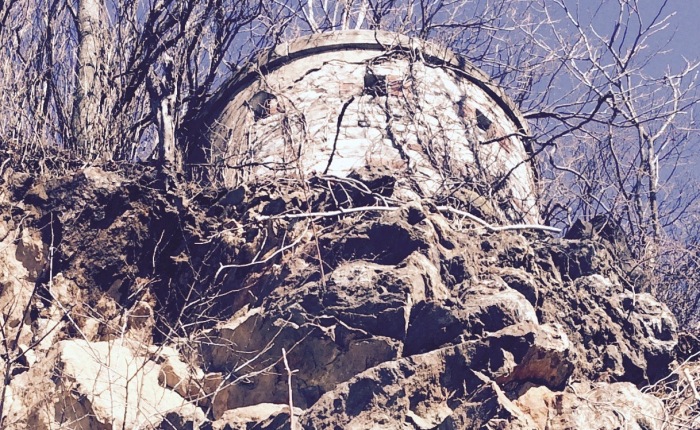 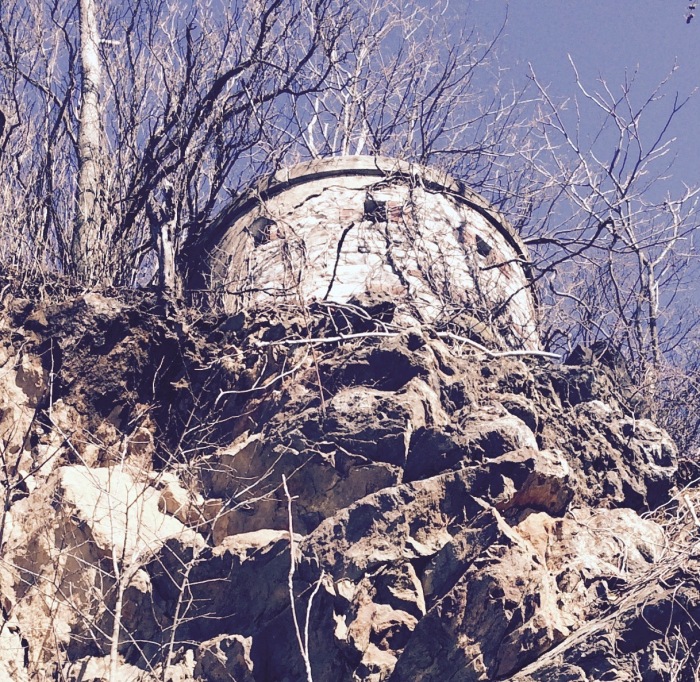 Spoiler: No it is not.

I had to update this post because I felt too many people saw the misleading title, but did not read the article.  I couldn’t, in good conscience, let people walk around Ossining thinking that there was a Revolutionary War Era gun emplacement here when in fact there is not.

It’s always looked like a Revolutionary War gun emplacement to me.  And it’s been a huge mystery – well, at least in the moment it flashes past.  Then, as is so often the case, I forget about it until the next time.

It’s taken me several years of extremely intermittent and apathetic research to solve this little mystery, but I think I’ve done it.

And, sigh, no.  It is not a Revolutionary War gun emplacement.

It seems it is just the foundation of a small gazebo on Oliver Cromwell Field’s properly, built in the early 19th century.

But let’s go deeper, shall we?

My original haphazard and undisciplined Internet research turned up nothing.  But then,  investigating something else, I stumbled upon an Archeological Assessment and Field Investigation report for the Hidden Cove Development that was being planned for the old Brandreth Pill Factory site.  Luckily, I downloaded the whole thing because the link to the Village site no longer works – I’m guessing this project is on permanent hold.

Anyway, this little document – well, it runs a cool eighty-four pages, so it is NOT little at all – makes for some surprisingly fascinating reading.  First, and please join me on this little tangent, who knew that there are six pre-contact sites of archeological interest within one mile of this one.  (Pre-contact means before Europeans arrived.  It is thought that humans have been living here for at least the last 13,000 years.)

Two of the sites are in Crawbuckie Park, but there’s no further information about exactly where (yet.)  Two more are somewhere nearby along the river.  The fifth is apparently the site of a pre-contact village at the mouth of the Croton River, but with no specific details.  Finally, the sixth site was professionally excavated in 1977 by Louis Brennan and is called Piping Rock: “a Paleo-hunter and Dalton Early Archaic Site.”  So as not to sideline this blog post too much more, allow me to promise that I will investigate this thoroughly soon in a future post.

But back to my Revolutionary War Gun Emplacement that is not . . .

On page 10 of this Report, there’s an achingly accurate history of the Brandreth parcel of land (we all know that the Brandreth Pill Factory was one of 19th century Ossining’s biggest employers, right?  And that Benjamin Brandreth was wildly successful at selling his highly impotent and useless patent medicines at a time when nothing else worked either.  Herman Melville even mentions them in “Moby-Dick!”  But I digress yet again.)

Originally, the land was stolen from the indigenous Sinc Sinck by Frederick Phillipse in 1685.  (Too much?  Okay, Phillipse made a completely fair trade, as has been so often the case in North American land transactions with native peoples.)

Over a hundred years later, an English gentleman named Oliver Cromwell Field purchased this parcel of land, and “immediately constructed a house on the promontory that overlooks the Hudson River. The house  was a large building in the Greek Revival style that had large columns on the southern exposure. During the Field’s occupancy a small summerhouse, or gazebo, was built on the tip of the southernmost cliff (the foundation is still extant on the site. (Assessment, 10)”

Aw, there you have it.  My gun emplacement, which in my mind was manned by courageous Sing Sing citizens during the Revolutionary War, who fired off potshots at the British vessels as they approached the Hudson Highlands, is really just some rich English guy’s 19th century gazebo.

Here are a few more pictures.  I STILL think it looks like a gun emplacement. 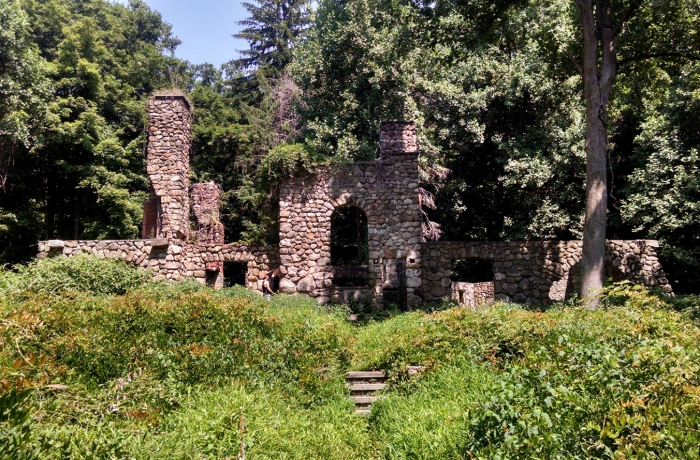 If you’ve been following this blog at all, you’ll know that I have a special interest in ruins.  From Elda Castle, to the Kress Estate, to the Brandywine Estate, to Rockwood  – there’s a plethora of them to explore in the area.  Few things are more exciting to me than discovering overgrown ruins hidden in the woods (someday I will write about stumbling upon the Ouvrage La Ferte in the Ardennes sector of the Maginot Line in France in 1984, but that’s a tale for another time.)

There’s something deeply compelling (and rather tragic) about the disintegration of grand, rich houses.  It’s a reminder of a past when the barons of industry and arts purchased great swaths of Westchester/Putnam land at the turn of the 20th century and built elaborate country manors.  It’s also a reminder of the strength of mother nature and the vicissitudes of life – nothing stands forever.

The Cornish Estate is definitely up there as a remarkable example of an elegant, early 20th century country home that has fallen on hard times.  Located just south of Breakneck Ridge in Garrison, you park at the brand spanking new Washburn trailhead and parking lot.  We hiked a whole loop, that takes you past an old quarry (which is unusual in its flatness), but you can also do an easy hike up the old driveway straight to the Cornish ruins.  Check out this link for a hiking map.

(And yes, I know this isn’t technically within the geographical purview of the Ossining History on the Run area.  But I make the rules, so I’m making an exception.  I mean, this is just too cool to ignore!)

Built in the 1910s by diamond merchant Sigmund Stern, the estate was originally dubbed “Northgate.”   According to Rob Yasinac at Hudson Valley Ruins.org, Sigmund Stern was actively involved in the adjacent Surprise Lake Camp, serving on its Board and selling parcels of land to the camp.  (To digress, Surprise Lake Camp is still in existence and is probably one of the first Jewish camps organized in America.)  Supposedly, and I cannot confirm this, the architecture of both the Northgate estate house and the main building of Surprise Lake Camp were very similar and built at around the same time. For what it’s worth,  I read through this pamphlet on the history of Surprise Lake Camp and could find no mention of a Sigmund Stern.   (But there’s lots on Eddie Cantor, an early camper and lifelong supporter.)

Sigmund, it seems, did not spend long at Northgate, selling both the house and the surrounding 650 acres in 1916 to Edward and Selina Cornish.  They lived there until 1938, when Edward tragically dropped dead at his desk at the National Lead Company.  Selina followed him to the grave two weeks later.  After that, it seems that some relatives of the Cornishes lived there until the 1950s, but I couldn’t discover much about that period.

You can still see the remains of a freshwater, gravity-fed swimming pool, a greenhouse, a pump house some distance away on the creek and a large stone barn.  Rob Yasinac asserts that “Cornish raised prize jersey cows here and newspaper articles of the 1920s chronicled the record-setting milk producing efforts of Cornishes dairy cows, including one named ‘Fon Owlet.'”  Alas, I have not been able to locate these newspaper articles. . .

In 1958, the house was mostly destroyed by fire. The heirs to the Cornish family sold the property to Central Hudson Gas and Electric, who were planning to build a power plant on the site.  (This was around the same time that Con Edison wanted to build a power plant on Storm King Mountain right across the river.)  After various local conservation groups fought the project, CHG&E gave up and sold or donated the land to the Hudson Highlands State Park.   (Fun fact, the Con Ed power-plant-on-Storm-King idea was active until the 1980s.  How lucky we are that neither plant was built.)

Check out Minsky’s Abandoned for more photos of the current state of the ruins.

And for more pictures of the estate in its prime, please visit this link (I’d reproduce the photos here for you, but the website specifically asks one not to.)